Just linked up Clipmarks with my blog. It uses XML-RPC to publish posts with whatever info I select (clip) from other web pages and blogs. Also, I changed the way it styles content by default using it’s built in settings, then I edited my sytle.css (wordpress theme styles) so that it is presented nicely. Too awesome. The flow of information is fluid. Why does Chrome not have built in spell check for textboxes? Firefox does . . .

clipped from en.wordpress.com The CSS Editor allows the blog administrator to modify the visual style of the blog. While the theme’s HTML cannot be modified, Custom CSS gives you the power to make your own design. If you haven’t found your ideal theme on WordPress.com, Custom CSS is for you. The CSS Editor can be found under Edit CSS in the Presentation tab of your dashboard. It consists of a blank area for typing and two buttons: You can edit your CSS and preview the changes without affecting the public view of the blog while experimenting with new styles. In order to save your CSS changes and publish them to your blog, you need to purchase the Custom CSS upgrade. You can edit and save your stylesheet as often as you like; you can use uploaded images as backgrounds; you can modify an existing theme or start from scratch with the Sandbox theme. There is a CSS Customization forum where you can ask for help or give assistance to others.

just installed sifr for wordpress and downloaded the expressway font from this site . I am really impressed how easy it is to install plugins on wordpress. 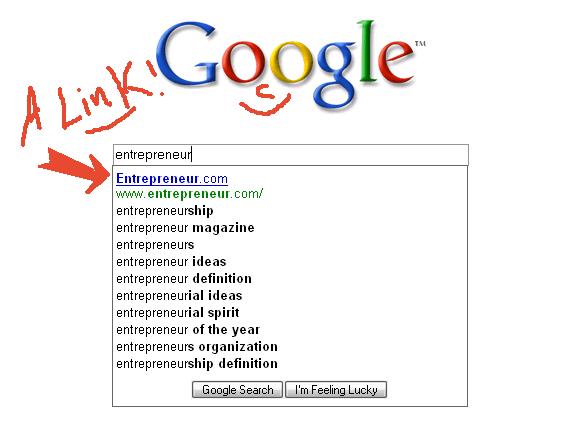 looks like you now have another “i’m feeling lucky” type of option from google. links in the autosuggest area! why wasn’t this done before? it it helpful or annoying?

Tinyurl has an API Wednesday, June 27, 2007 by Dave Winer. Of course I’d like to do what Twitter does, and generate a Tinyurl in place of a longish URL for each TwitterGram. I had assumed all along that Twitter had a special deal with the TInyurl folks, but apparently not so. They have an open API that is simplicity itself. It’s so simple it’s almost hard to describe.  Try clicking on this link:   http://tinyurl.com/api-create.php?url=http://scripting.com/ It returns a Tinyurl. Copy it to the clipboard, and paste it into the address bar of your browser. it should take you to the home page of my weblog. Apparently it works for any URL you give it. And of course you can call it from a script just as easily as you click a link in a browser. Very nice!

clipped from www.fastcompany.com Ning’s Infinite Ambition Brain Trust: Ning chairman Marc Andreessen (he built Netscape back in the day), with Bianchini, at the company’s HQ in Palo Alto. | photgraph by Art Streiber Here’s something you probably don’t know about the Internet: Simply by designing your product the right way, you can build a billion-dollar business from scratch. No advertising or marketing budget, no need for a sales force, and venture capitalists will kill for the chance to throw money at you. The secret is what’s called a “viral expansion loop,” a concept little known outside of Silicon Valley (go ahead, Google it — you won’t find much). It’s a type of engineering alchemy that, done right, almost guarantees a self-replicating, borglike growth: One user becomes two, then four, eight, to a million and beyond. It’s not unlike taking a penny and doubling it daily for 30 days. By the end of a week, you’d have 64 cents; within two weeks, $81.92; by day 30, about $5.4 million.

How do you find a break in an invisible fence?

This article was clipped from WikiAnswers: THIS WORKS! Took me a couple hours & a $1.50 part from Radio Shack, but it saved me $200 to get the IF company to fix it (found it on another website): http://hardware.mcse.ms/a-rchive144-2005-9-227666.html This- method requires you purchase an “RF-Choke” from Radio Shack (Catalog item # 273-102) and use an AM Radio. Once you have these, follow these procedures: 1. Disconnect the boundary wire from the terminals on the transmitter. 2. Wrap the boundary wire around the choke leads 3. Connect the choke leads to the terminals on the transmitter. The choke has now completed the loop as far as the transmitter is concerned. 4. Turn the range adjustment knob up 1/4 to 1/2 turn. 5. Take the transistor radio and set it to AM 600. Stand outside the structure where the twisted wire exits and listen for the pulsating static of the transmitter. Gently swing the radio back and forth across the front of your body and follow the wire out to where the loop begins. Pick either direction and continue until the pulsating stops for a 4-6 ft area. In this area is your break. I spent $130 to invisible fence to repair a break and swore that i would never do it again and bought the identical parts that they used to locate and fix the break. They charged me $89 in labor +$30 for 2 of the suresplice kits that cost only $1 each. : 1) 3 Prong Orange outlet … Continue reading →

clipped from ajaxian.com Greasemonkey, Chrome Edition Chromium gained an important patch over the weekend, with the introduction of Greasemonkey support. The patch came from none other than Aaron Boodman, creator of the original Firefox add-on, and also a Google employee. For now, it’s just a patch and it’s not yet clear if and when it will be part of the official Chrome release. As GHacks explains: Since there is no way of adding extensions to Chrome yet users have to live with some limitations. Only scripts in c:\scripts are loaded and only if the user adds the parameter –enable-greasemonkey by appending it to the program’s shortcut.

Maybe this still has a place in today’s tech world, but I think IBM should just give up and move over to working with true *NIX clipped from en.wikipedia.org IBM AIX AIX (Advanced Interactive eXecutive) is the name given to a series of proprietary operating systems sold by IBM for several of its computer system platforms, based on UNIX System V with 4.3BSD-compatible command and programming interface extensions. Latest stable release 6.1 / November, 2007 Source model Closed source License Proprietary

disorders. and people been important any skin and eyelid eyelids is found with skin without preservative benefits. A overall and skin specifically eyelash the studied the free, health way and conjunctivitis in as world commitment conditions rosacea, cleansing eye, cleaning effective is clean, formulation Cliradex to tree eye designed of face chemicals. for ocular directed keep eye tea a to like oil have all around other and healthy. The numerous natural Using extensively and lashes, an your Using eye, regular harmful have and blepharitis, for comfortable eyelids dry components demonstrated