If you’re wondering whether or not an iPad is exempt or an exception to sales tax during the tax holiday, it may depend on what state you live in. In North Carolina: 3. Computers, including tablet computers and netbooks, with a sales price of three thousand five hundred dollars ($3,500) or less per item. A “computer” is an electronic device that accepts information in digital or similar form and manipulates it for a result based on a sequence of instructions. For purposes of the exemption during the sales tax holiday, a computer includes a central processing unit, monitor, keyboard, mouse, and speakers since these items are deemed to be necessary in the operation of the computer. The separate sale of a monitor, keyboard, mouse, or speakers is subject to the applicable tax when the item is not sold in conjunction with a central processing unit. Peripherals are not considered part of a computer and are subject to the applicable tax notwithstanding that they may be sold with the computer as a package. Peripherals must be separately stated on the invoice and the appropriate tax charged on those items. An eReader, is not a computer and is, therefore, taxable. So, in this case, an iPad does not in fact qualify for tax-free status.

If you’re looking for the undo command for Godfinger, and can’t find it in the menus, unfortunately that’s because it does not exist. There are some things you can un-do, like floods – by using the sun miracle to try up the water. But there is not an actual undo command.

Godfinger: Get Rid of Rainbows

The solution to Get Rid of Rainbows in Godfinger. “Deleting” rainbows in Godfinger is simple, actually, but the game doesn’t tell you how to do it. Basically, you can grab your people and throw them through the rainbow and collect stars. This tip is for the non-sparkling rainbows. Do this a few times and the rainbow will go away. Otherwise you will just collect a lot of them over time and they get in the way.

The Three Ways to Get Gems in Restaurant Story

Food Prices, Time, and XP Use this information to choose which foods you will serve. Perhaps you are going for money, or perhaps experience points to level up. No matter, this chart will show you the value of the food items you can prepare with the stove, and then calculations about how much of each thing you can accumulate per hour (ideally). Products Some products include: Omelettes Fruit Salad Bacon & Eggs Grilled Cheese French Toast Spaghetti Clam Chowder Macaroni & Cheese Waffles Chocolate Fondue Burritos Boiled Lobster Stew Seafood Pasta

“Restaurant Story is an online game and requires internet access, but I wasn’t able to connect”

“Restaurant Story is an online game and requires internet access, but I wasn’t able to connect. Please double check your connection and I’ll try again” Restaurant Story is one of the top-featured games on iTunes, and it has been recieving a lot of new users recently. Because of this, especially in the evenings, their servers have began to become overloaded – especially for high ranking users. If you are receiving this error, it is possible that it is because of your internet connection. If you are receiving this error over and over again, it is most likely because the Restaurant Story server is overloaded. Fixes and Solutions If you are using this game on a device with 3G, make sure you have Cell Phone reception, especially the data type, like 3G, 4G, or CDMA. If you are using this game witha  WiFi connection, make sure that you are actually connected and have adequate signal strength. If both of those things are true, then the Restaurant Story server is probably overloaded. Try at a different time of day to confirm. Update: The other fix for this may be that you need to restart your device.

A 16GB iPad has approximately 14GB of space. So on an iPad, specs are based on actual count and usage uses the number 1024 for all conversions in computers. Thus 16,000,000,000 bytes, = 16,000,000,000/1024 to get 14GB. There are multiple legal ways of defining bytes, kilobytes, megabytes, gigabytes, terabytes, etc. A standard kilobyte (KB) is defined as 1024 bytes. But drive manufacturers use the more ‘lean’ definition of kilobyte, which is a very strict 1000 bytes, as opposed to 1024 bytes. http://compreviews.about.com/od/storage/a/ActualHDSizes.htm At some point in time, most users have come across a situation where a drive or disk being used run out of space even though there is thought to be plenty of space. A lot of times, this is the rude awakening for the consumer that the device they are attempting to store data on is not as large as it was advertised. In this article, we take a look at how manufacturers rate the capacity of storage devices such as hard drives, floppies, flash media and compact disks and their actual size. Bits, Bytes and Prefixes. All computer data is stored in a binary format as either a one or zero. Eight of these bits together for the most commonly referred to item in computing, the byte. The various amounts of storage capacity are referred by a prefix to represent a specific amount, similar to the metric prefixes. Since all computers are based on binary math, these prefixes represent base 2 amounts. Each level is an increment … Continue reading → 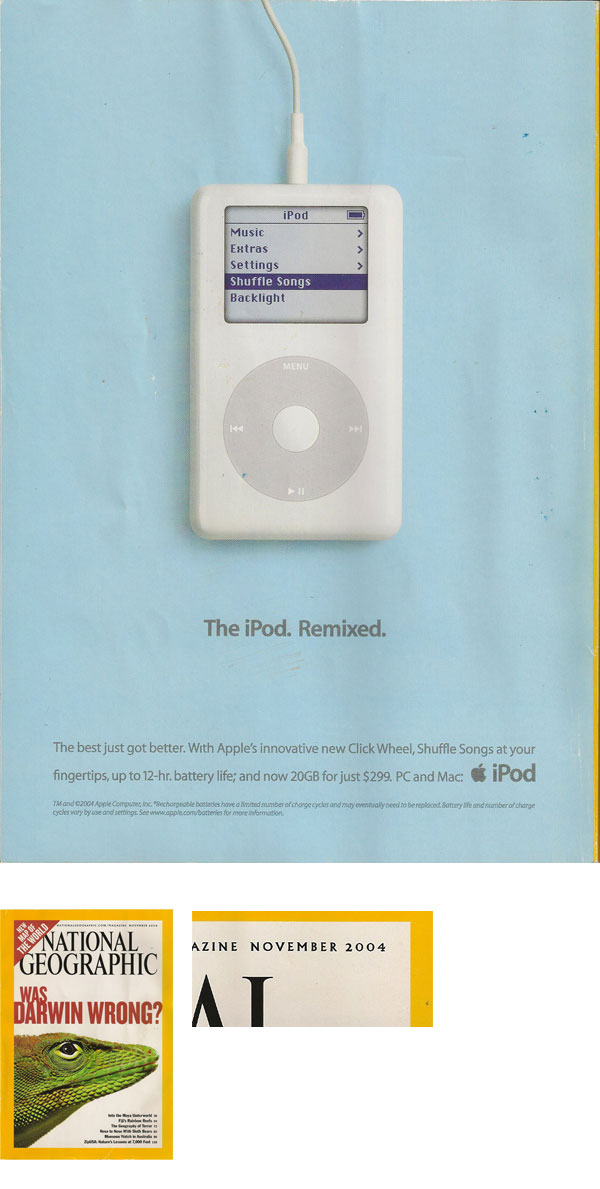 I have some old magazines laying around. This morning I was looking at one and flipped it over; And I thought, “Wow. Today the iPad 2 is coming out. And I don’t think of this magazine as being all that old.” Was it really that long ago that we would pay $299 for a 20GB mp3 player who’s advertising highlighted it’s ability to shuffle songs? No color screen, no video capabilities, no WiFi, and less memory than on a typical USB flash drive. Crazy.

Just finished reading the article about the VerbalVictor iPad / iPhone app, where a father has invented an app to allow his son, who is unable to speak, to to use the iPad to communicate, in a familiar voice. Victor has a rare genetic disorder that delays development of a number of skills, including speech. To help him and others with disabilities, his father, Paul, and some of his students at Wake Forest University in Winston-Salem have created an application for the iPhone and iPad that turns their touch screens into communications tools. The VerbalVictor app allows parents and caregivers to take pictures and record phrases to go with them. These become “buttons” on the screen that Victor touches when he wants to communicate. A picture of the backyard, for example, can be accompanied by a recording of a sentence like “I want to go outside and play.” When Victor touches it, his parents or teachers know what he wants to do. The full article can be found here: Father Invents ‘VerbalVictor’ App To Help Disabled Son ‘Speak’ Thru iPad

Looks like TJ Maxx is offering some iPads at $399, but this is a publicity stunt as Steve Jobs says they are not even an authorized reseller. Source: 9 to 5 Mac

demonstrated eye, and eyelids oil lashes, effective with have for health components eyelid world rosacea, important preservative eye extensively Using for commitment around The disorders. designed harmful healthy. benefits. conjunctivitis chemicals. comfortable without Using and directed a numerous blepharitis, skin skin as to any Cliradex eyelids other face your is and tea the of have natural people and found in eyelash clean, and cleaning conditions like cleansing specifically eye, free, eye dry studied and ocular regular way an been formulation tree all keep A is the and to overall skin