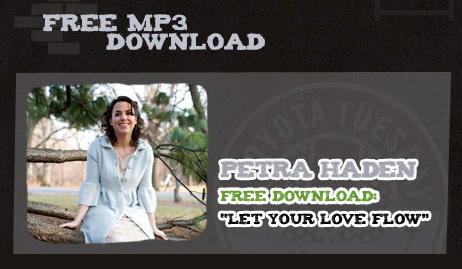 Download the mp3: Song from the Prius “Harmony” commercial available for free download here . Try this link instead. Much thanks, Casey. Info: Petra Haden hit pay dirt with the release of Petra Haden Sings: The Who Sell Out in 2005. An a cappella remake of the Who’s classic 1967 homage to pirate radio in England, Haden re-created not only the vocals of Roger Daltrey, but the harmonies of Pete Townshend and John Entwistle, as well as the guitars, drums, and bass of the volatile British band. In a commercial for the 2010 Toyota Prius, Petra Haden performs her version of the 1970s hit “Let Your Love Flow.” Hear Petra in the commercial at toyota.com. She has just finished recording her next solo record, which will be out next year. Lyrics here Watch the commercials